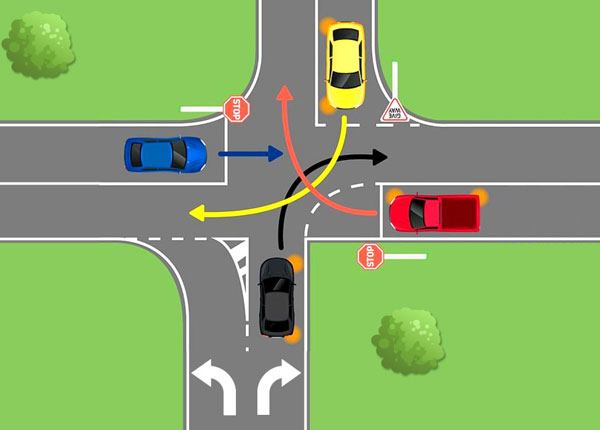 Right of Way at Intersections: Who Goes First and When to Yield

Intersections are formed where two or more roadways intersect. As this brings conflicting streams of traffic together, drivers using an intersection must rely on right-of-way laws to determine who goes first. Depending on the type of intersection you are dealing with, there may also be traffic control devices such as road signs or traffic lights present to keep traffic moving in a safe and coordinated fashion.

Even on fully-controlled intersections that utilize these devices, right-of-way traffic laws will play a part in maintaining order. Nowhere are drivers more at risk, than when merging into a gap in traffic or crossing a conflicting stream of traffic. Both these maneuvers frequently occur at intersections. To choose a safe path through an intersection, motorists must understand right-of-way rules and learn to accurately judge the speed and location of other vehicles.

Preparing to use an intersection

Motorists preparing to drive through an intersection must consider various factors when determining who has right-of-way. Begin by establishing which lane you need to be in for your desired course of travel and merge into that lane as soon as possible. Then, scan the roadway around the intersection to answer the following questions:

When there are no traffic lights or road signs controlling an intersection, drivers have only their knowledge of right-of-way rules to guide them. The following sections will talk you through the main rules to remember when establishing right-of-way without support from traffic control devices.

First in, first out

In most cases, vehicles will arrive at an intersection at different times. It is easy to establish who must yield in these circumstances, as the “first in, first out” rule applies. The driver who reaches the intersection first goes first; the second driver must yield until the first driver has completely cleared the intersection.

Yield to the right

“Yield to the right” does not mean you can automatically drive through the intersection if the roadway to your right is clear. Remember to watch out for vehicles approaching from the left and make sure they are going to yield before you proceed.

If two vehicles approach an intersection from opposite directions and one wishes to drive straight through while the other wishes to turn left, the left-turning driver must yield. Ordinarily, opposing traffic could move through an intersection at the same time, providing there is no cross traffic. However, in this situation the left-turning driver’s path would cut directly across the opposing driver’s path. Any motorist seeking to turn left at an intersection, or into an alley, driveway or private road, must yield to oncoming traffic.

In general, traffic turning at an intersection should yield to traffic moving directly through the intersection. Of course, this does not necessarily apply when traffic control devices are present.

Right-of-way on single- or two-lane roads

If you are traveling on a single-lane or two-lane roadway that meets a wider road of three lanes or more, you must yield to all traffic on the broader roadway before proceeding. This is because the broader road is likely to be busier and more hazardous, making it harder for motorists on that road to yield right-of-way.

For similar reasons, traffic approaching a through road from an ending road at a T-intersection must also yield. Often, the through road which forms the top of the “T” is a faster and more heavily traveled road. Even if this is not the case, it would be illogical and difficult for traffic on the through road to yield to adjoining traffic.

Right-of-way on driveways and private roads

If seeking to enter the main road from a driveway, alley or private road, a motorist must yield to all traffic already on the main road and any pedestrian traffic wishing to cross the driveway’s entrance. When obstacles obstruct your view of the sidewalk in either direction, you should come to a full stop prior to the sidewalk to check for pedestrians before proceeding.

Motorists parked by the roadside who wish to re-enter traffic on the roadway must also yield to vehicles already using the roadway. If you intend to turn into a driveway or alley situated immediately after an intersection, do not begin to signal your turn until you have entered the intersection. Otherwise, you may confuse other road users.

Right-of-way at controlled intersections is at least partially dictated by traffic control devices, such as road signs or traffic signals. It is important to remember that traffic control devices rarely resolve all potential conflicts, so right-of-way rules must still be factored in. For instance, a green traffic light may permit you to turn left at an intersection but unless that turn is protected, you will still need to yield to oncoming traffic.

The assistance provided by traffic control devices means that controlled intersections are generally safer than uncontrolled intersections. However, this is only the case if drivers remain vigilant. You must always check that the intersection is clear and that no other vehicles will interfere with your path of travel before proceeding, even if a road sign or traffic light indicates that you may go.

Some intersections are semi-controlled, in that stop signs are installed on certain roadways yet not on others. Exercise caution when entering an intersection from an uncontrolled entrance, as other vehicles may not yield the right-of-way as they should.

Every motorist approaching an intersection entrance controlled by a “STOP” sign must come to a full stop and yield the right-of-way before proceeding. Keep in mind that traffic cops will cite you if they witness you performing a “rolling stop” at a stop sign-controlled intersection. “Full stop” means exactly that.

Many drivers do not realize that they must stop before entering a stop sign-controlled intersection, even when they have already stopped behind other motorists waiting to enter the intersection. When all vehicles ahead of you have passed through the intersection, you must still stop completely at the designated stop line or prior to the pedestrian crosswalk and yield to all conflicting traffic and pedestrians.

Intersections marked with a four-way stop sign should be treated like uncontrolled intersections. Motorists approaching the intersection at the same time must come to a complete stop and yield to the vehicles on their right before proceeding. Otherwise, the “first in, first out” rule applies.

When traffic lights are used to control an intersection, it is usually resoundingly obvious who must yield the right-of-way. When facing a green light, drivers may proceed with caution but yield to opposing traffic when turning left (unless the turn is protected by a green arrow signal). Yellow lights tell drivers to stop if it is safe to do so, while red lights always mean stop. However, the way in which vehicles may proceed having stopped at a red light is determined by several other factors.

All student drivers must refer to their state’s driving manual for details concerning right-of-way rules at red traffic lights in their area. Though, the rules listed below apply in most cases:

Most states permit turning right under a red traffic light, unless there is a “NO RIGHT TURN ON RED” sign posted at the intersection. Check out your driving handbook for details. Where right turns on red are allowed, drivers must still come to a complete stop and yield to all cross traffic and pedestrians before starting the turn. When turning left from a one-way street onto another one-way street, drivers are usually permitted to turn under a red traffic light.

Flashing yellow traffic lights are relatively rare and can sometimes confuse drivers. If you encounter this signal at an intersection, you must treat it the same way as a “YIELD” sign. This means yielding to all cross traffic and pedestrians, stopping if necessary and moving through the intersection with caution.

What happens if you approach an intersection which is usually controlled by traffic lights, but the signals are inoperative? Such situations would be chaotic, if it weren’t for right-of-way rules. When traffic lights fail, any lane of traffic faced with an inoperative signal must treat that signal like a “STOP” sign. If every lane is facing an inoperative light, the intersection must be treated as a four-way stop intersection with each motorist stopping completely and yielding to their right. 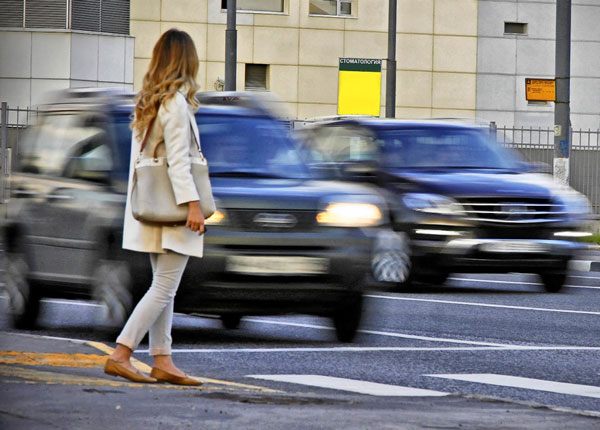 Conflicts between vehicles and pedestrians must be avoided at all costs. Remember that you must always yield to pedestrians on the roadway, even if you believe the lawful right-of-way is yours. 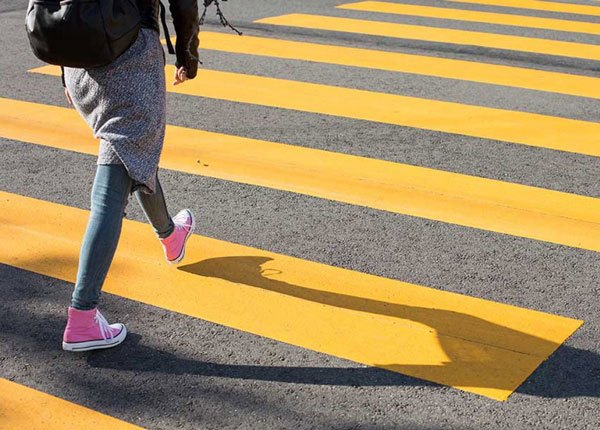 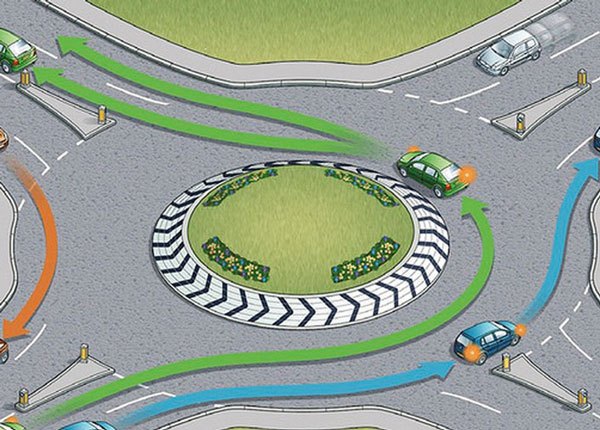 Right-of-way conflicts are less common on roundabouts than they are at other intersections, as all traffic is moving in a counterclockwise direction and there are no left turns. The golden rule when it comes to roundabouts is that traffic approaching the intersection must yield the right-of-way to traffic already circling the center island.

Communicating With Other Drivers

All drivers must learn to communicate with other motorists effectively, in order to keep the flow of traffic moving in a smooth and orderly fashion. You cannot control another driver’s actions but if they communicate their intentions, you can adjust your driving behavior to avoid conflicts and disruptions.

When a driver has right-of-way, it means they currently have permission to pass over a section of roadway. Whenever two motorists wish to occupy the same section of roadway at the same time, right-of-way rules will determine who goes first. Understanding and respecting right-of-way is essential, as it allows road users to avoid conflicts which could impede traffic flow or cause a collision.