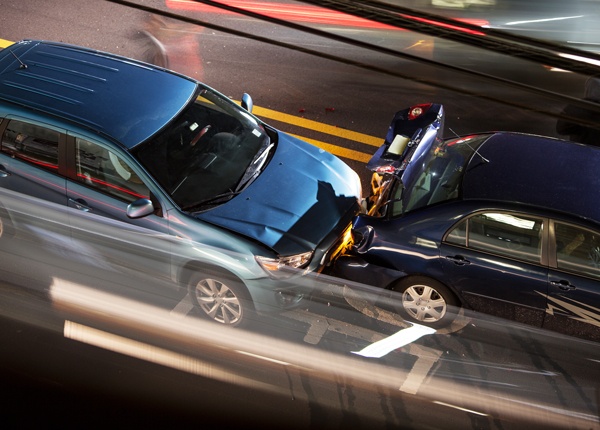 No two collisions have ever played out in precisely the same way. There are countless different factors that determine the severity of a traffic collision, including the types of vehicles involved, their safety features, whether the drivers are wearing seat belts, the conditions on the roadway and speed. However, the consequences of collisions are often closely linked to the way in which they occur. For instance, head-on collisions are generally the most severe; whereas, vehicles involved in rear-end collisions typically sustain minor damage. If you understand traffic collisions, you will be better able to react appropriately in an emergency.

“Head-on” describes any collision in which a vehicle collides with an object directly in front of it. This may be a tree, a wall, a trash can, some other object or another vehicle. Most traffic collisions are head-on for one of the drivers involved. Head-on collisions are usually severe as 100 percent of the vehicle’s velocity is directed towards the point of impact. If two vehicles traveling toward each other collide head-on, the consequences are often catastrophic.

When you strike an object head-on, the sudden stop or reduction in speed will result in a powerful forward pitch that throws everything and everyone in the car towards the front of the vehicle. Any person that is not held in place by a seat belt or restraint will continue moving at the speed at which the vehicle was traveling prior to the collision until an immovable object stops them. This may be the dashboard, the rear of a front seat, or the pavement outside the vehicle.

Modern vehicles are designed to crumple during head-on impacts, to absorb some of the energy throwing the occupants forward. Airbags that deploy on impact serve a similar function. As even relatively slow head-on collisions can be deadly, neither of these safety precautions will protect you from serious injury unless you are also wearing your seat belt.

When a vehicle is struck from behind by another object (most commonly, another vehicle) it is known as a rear-end collision. Rear-end collisions are generally less destructive, as the vehicle which has been struck is either stationary or moving directly away from the point of impact. The faster that vehicle is moving, the less forceful the impact will be.

A vehicle that is struck from behind experiences a backward pitch, whereby all the occupants and any loose objects are thrown towards the back of the car. Most vehicles are designed to crumple at the rear during rear-end collisions to lessen the force of impact. Though some, like minivans, are not built with a rear crumple zone. People involved in rear-end crashes are thrown back into their seats and therefore less likely to sustain a serious injury than those experiencing a head-on collision. The most common injury in rear-end collisions is whiplash, a neck injury that occurs when a person’s head snaps backward and forward as the vehicle is struck from behind.

While rear-end collisions are typically not severe, they can sometimes lead to more serious traffic accidents. Often, the vehicle that is struck from behind is shoved forward by the force of the colliding vehicle. If there is nothing ahead of you to halt this forward movement and you were waiting at traffic lights or a stop sign, you could end up being pushed into the path of cross-traffic and struck again from the side.

Monitoring the space behind your vehicle and following proper signaling procedures will reduce your chances of being involved in a rear-end collision. Do your best to maintain a safe cushion of space behind your vehicle by adjusting your position in traffic, though remember that you must not speed up to avoid a tailgater. Whenever you need to slow down or stop, activate your brake lights by lightly tapping the brake pedal before you begin your reduction in speed. This will warn drivers to your rear that you are preparing to slow down, so that you do not take them by surprise.

Maintaining a safe following distance will help you to avoid rear-ending another vehicle. In addition, you should scan the roadway at least 12 to 15 seconds ahead of your current position to look out for changes that may cause the vehicles in front of you to slow down or stop.

Side-impact collisions occur when one vehicle strikes another side-on. Usually, the point of impact is the side of the passenger compartment, which is bad news for anybody occupying the vehicle which has been hit. Crumple zones at the front and rear of most vehicles go a long way to protect occupants during head-on and rear-end collisions, but the side of a vehicle offers no such protection. During a side-on collision, the full forward force of the colliding car will be transferred directly to the passenger compartment. This will throw the driver and passengers side-ways, towards the point of impact. In high-force collisions, windows may be smashed, and the doors of the vehicle will be buckled inwards.

Side-impact collisions are the most common type of collision at intersections and in parking lots. They occur when one of the drivers involved has purposefully of accidentally ignored right-of-way rules. Always respect right-of-way laws and abide by the instructions given by road signs and traffic lights implicitly. Remember that other motorists may not yield when you expect them to. Keep an eye on the streams of traffic feeding into an intersection and be prepared to yield, even when the right-of-way should be yours.

Serious collisions and traffic accidents sometimes cause one or more of the vehicles involved to roll over. Often, the vehicle that rolls will leave the roadway altogether. Vehicles with a high center of gravity – such as SUVs and pick-ups – are particularly susceptible to rolling over when struck from the side or while performing an evasive turn.

Roll-overs are often deadly for any unrestrained occupants in the vehicle. When a vehicle rolls over multiple times, the people inside it are subject to a strong centrifugal force pulling them towards the outside of the vehicle. In this situation, anybody not wearing a seat belt is likely to be thrown from the car.

Single-vehicle collisions happen when a moving car collides with a stationary object. As incidences of hazardous objects being in the roadway itself are relatively rare, single-vehicle collisions usually occur when the driver has lost control of the vehicle and left the roadway. The object they hit may be a tree, a lamppost, a building, a bus shelter or if the occupants are fortunate, something softer like bushes or a sandbank.

Sometimes, a driver who has lost control or their vehicle or swerved evasively to avoid a collision will come off the road and end up in a body of water. While this will lessen the force of impact, deep water poses another threat: drowning. If this happens to you, remaining calm and acting quickly can save your life.

Your first and only priority if your car lands in a lake, river or another deep body of water should be getting yourself and all other occupants out of the vehicle. If you cannot open the doors as your vehicle begins to sink, roll the windows down immediately. It is better to let the car fill up gradually, as opening the windows when it is completely submerged will let in a powerful rush of water that may prevent you from getting out. Once the windows are open, unbuckle your seat belt, take in a large gulp of air and leave the vehicle.

Ultimately, your safety and the safety of your passengers are your responsibility. If you drive attentively, keep your speed to a minimum and avoid taking unnecessary risks, it is highly unlikely you will ever be involved in a serious collision. While it is true that you cannot influence the behavior of nearby motorists who may collide with you, you can predict and avoid potential collisions by maintaining space around your vehicle and acting pre-emptively to stay away from dangerous drivers.

Understanding where conflicts and collisions are likely to occur will help you achieve this! The common causes of traffic collisions are explored in our next module. With this information, you can learn to accurately assess risk in different roadway environments and minimize your chances of being involved in a collision. 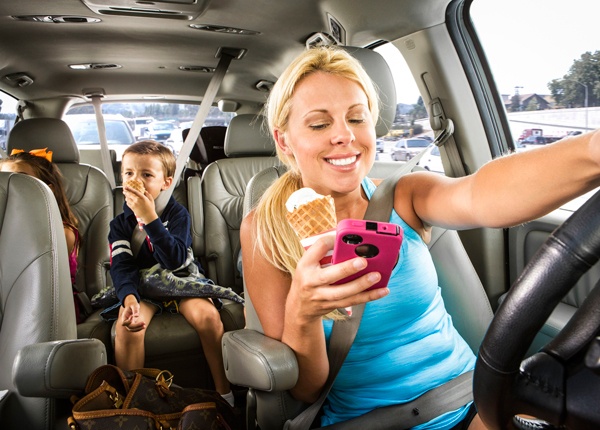 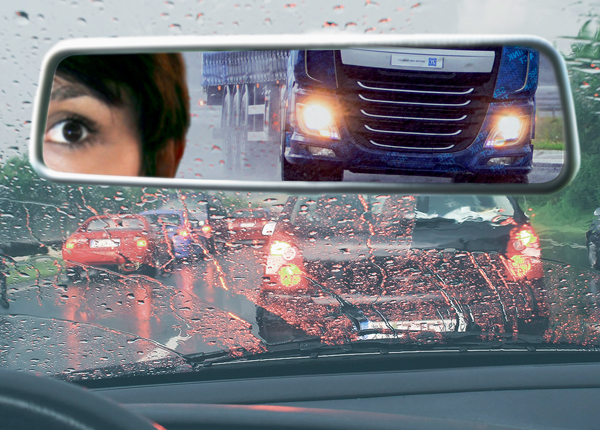 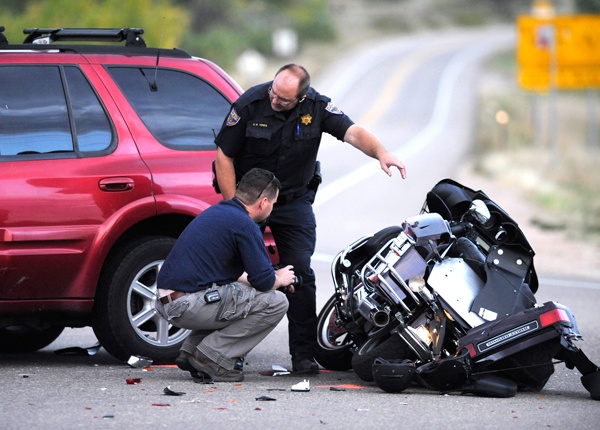 The balance of your vehicle (where its weight sits) will be altered every time you speed up, slow down or turn the steering wheel. Fortunately, precise steering, smooth acceleration and gradual braking can prevent loss of balance.

Factors such as the gradient of the road, the material the road is surfaced with, the condition of the road surface, the width and shape of the road and even the weather will influence your car’s center of gravity and its ability to grip the pavement.

The Physics of Traffic Accidents 1 of 1

The Physics of Collisions

The amount of damage sustained in a traffic collision is determined by the energy your vehicle has at the moment of impact, and the energy of the object you hit. It is important to understand the forces at work in collisions, as there is usually some action a driver can take to minimize the severity of a crash, if one is imminent.

Traffic accidents and collisions are an inevitable part of being a driver. Even if you manage to avoid serious property damage or injury during your time as a motorist, it is likely that you will at least experience some sort of minor collision. Learn how to evade and minimize the severity of different types of traffic collision.