Choosing a Safe Speed: The Effects of Speed on Stopping Distance

Motorists must choose a safe speed based on the posted speed limit, the speed of other vehicles around them and current driving conditions. In an ideal situation, all vehicles occupying the roadway would be moving at roughly the same speed, slightly within the posted speed limit. Traffic can flow safely and efficiently under these circumstances, as very few adjustments in speed and position would be required by individual drivers.

You may have noticed that certain stretches of roadway do not have speed limit signs. These areas are controlled by “prima facie” speed limits, which are established by each state’s transportation department. Prima facie speed limits apply when no other speed limit signs are present; they vary based on the type of road you are driving on and are the same everywhere within the boundaries of the state.

There are other rules governing speed limits in special areas where cautious driving is required, such as school zones. Like prima facie rules, these “special zone” speed limits may not be posted – so all drivers must know them. 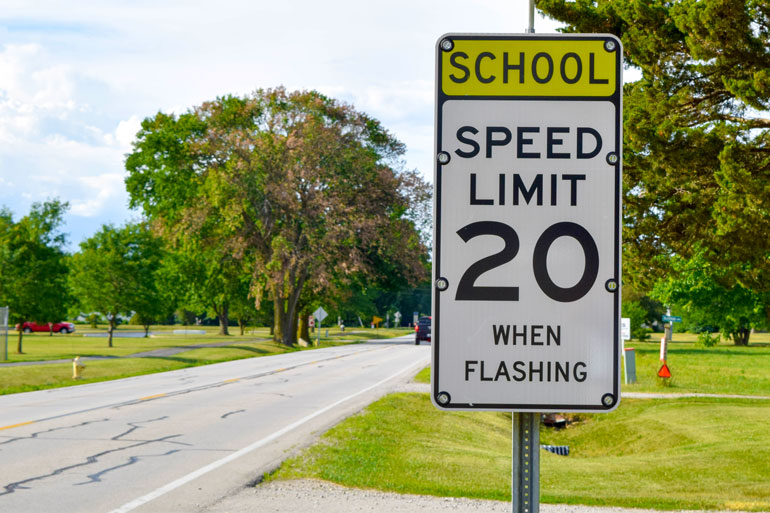 School zones typically have speed limits between 15 mph and 25 mph, 25 mph being the most common speed limit for school zones in the US.

The speed limit on any given roadway – whether posted or prima facie – sets the maximum speed at which you should travel during ideal conditions. All drivers are legally obligated to adjust their speed below this limit if conditions mean that driving at that speed would be unsafe. When visibility or traction are poor, you must alter your speed accordingly.

For instance, you should not drive at or near to the established speed limit when:

Sometimes, signs stating a minimum speed limit will be posted on a roadway. This is usually only the case on certain high-speed roads where driving too slowly can present a hazard to other, faster-moving traffic. As with maximum speed limits, you must drive slower than the minimum posted speed limit if poor driving conditions demand it. 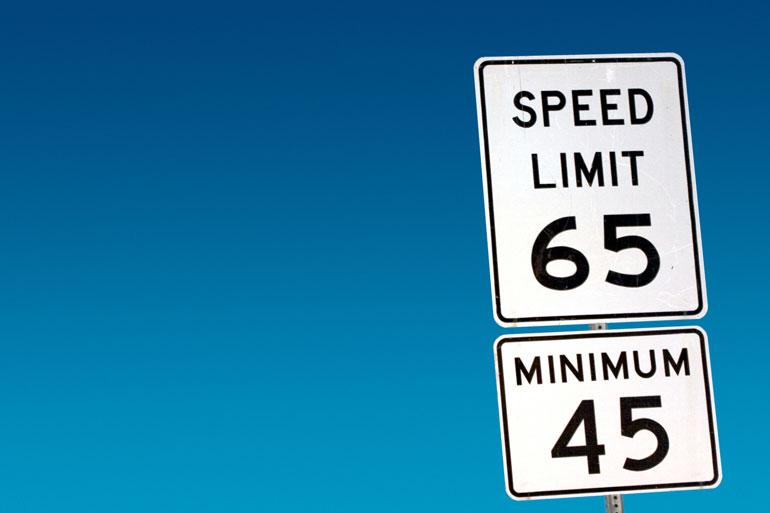 Driving too slowly may be against the law. You must not drive so slowly that you block or delay traffic moving at normal, safe speeds. Sometimes, a minimum speed limit sign is posted for guidance.

Speeding is a traffic violation that can incur fines, penalties and more severe punishments if it causes a crash. More importantly, speeding takes lives. In 2017, speeding was named as the primary cause of 9,717 fatalities around the United States. According to the National Highway Traffic Safety Administration, that is nearly one-third of all traffic-related deaths.

Speeding not only endangers the person committing the offense, but every other person on or near the roadway. When you exceed a safe speed limit:

The faster you drive, the greater the impact or striking power of your vehicle. Approximately 30 percent of all traffic fatalities can be attributed to driving above the speed limit.

Speed adversely affects stopping distance in several ways. Traveling faster gives you less time to see and react to hazards, makes maneuvering more difficult and means it will take longer for your vehicle to stop once the brakes have been applied. On average, it takes a driver between one and three seconds to think and react from the moment they realize they need to stop. This may not seem like very long, but at 60 mph a car of average weight could cover 88 feet per second.

High speeds greatly increase stopping distances. Double your speed from 20 to 40 MPH, the braking distance and impact are 4 times greater.

What is a safe following distance?

Sharing the road with speeding drivers

If you can see in your side-view or rear-view mirrors that a speeding vehicle is approaching from behind, do not panic. Altering course suddenly could cause a collision as the speeding driver may not have time to react, maneuver or stop. Remain calm and allow the speeding driver to pass you, moving over to the right-hand side of the road if necessary. Never chase, block or sound your horn at a speeding vehicle – this will only increase the likelihood of a collision occurring.

Speeding drivers endanger every other driver on the roadway. If you believe another motorist is exceeding the speed limit or driving fast enough to pose risk, you may pull over to call the police or Highway Patrol. Alternatively, ask a passenger in your car to make the call for you. Do not allow a speeding driver to distract you from the most important task at hand – driving!

Passing another vehicle will always temporarily increase the risk you are exposed to at any given time on a stretch of roadway. Remember that most situations require passing on the left-hand side of the vehicle in front. Passing on the right is permitted only in certain rare circumstances.

When Passing is Legal