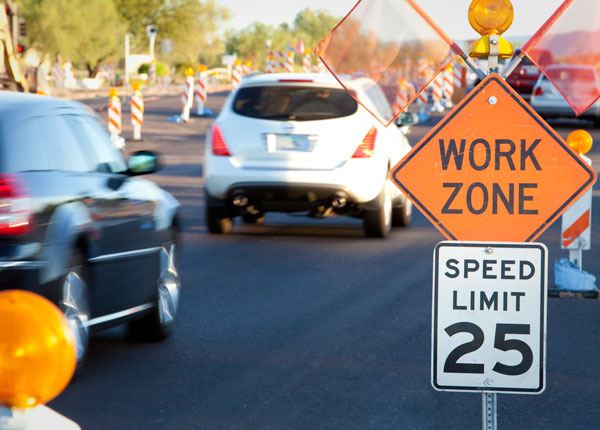 Most roadway construction and maintenance projects around the United States are conducted without completely closing the road to traffic. Often, it is high-traffic roadways such as urban highways and city streets that require repairs or development, as they are subject to greater wear and strain than less well-traveled areas. Closing such busy stretches of road would cause severe disruption to commuters – it is for this reason that they are generally left open while the work is being carried out. Unfortunately, road work zones pose a significant hazard to drivers, their passengers and the construction or maintenance workers occupying the site.

The complex risk environments created by roadway work zones around America resulted in some 96,626 crashes in 2015 alone. This amounts to one crash every 5.4 minutes. While many of these incidents only resulted in property damage, a large number lead to injuries or fatalities:

The term “work zone” refers to any area on a public road where utility, construction or maintenance work is being conducted. Work zones are often unanticipated by drivers and usually involve lane closures or obstacles. As a result, they generally hinder the flow of traffic to some degree.

There may be barriers, cones, heavy equipment, temporary signs, signal lights and workers in the roadway, prior to, during and beyond work sites. Furthermore, roadway work zones may be stationary (when an interchange is built) or mobile (when road markings are painted), making it difficult to determine where the danger begins and ends.

Most work zone crashes are caused by irresponsible or distracted drivers. As a motorist, you have a responsibility to abide by all signs, signals and traffic control measures established around roadway work zones, and to navigate these areas with the utmost caution.

In nearly all cases, traffic signs and control devices are set up in and around a work zone to direct motorists. These may include channeling devices such as cones, drums and barricades, temporary road markings, portable signs, electronic message boards and arrow boards. Keep in mind that warning signs around work zones are generally orange. There may also be flaggers or other traffic control workers in the roadway directing vehicles.

This amounts to a great deal of information to take in. Plus, the instructions given by these signs and signals will likely contradict the way you would usually drive on this road prior to the work zone being established. We should also point out that these traffic control measures could change daily, as the project progresses.

When approaching a work zone, reduce your speed and check the road ahead for slowing or stopped traffic. Look out for diversions and pay attention to traffic signs and signals. If there are police officers, flaggers or other workers in the road directing traffic, you must follow their instructions implicitly.

You may be able to reduce your speed and move through a work zone without stopping. Though in many cases, traffic must be stopped before moving through a work zone. This will probably be the case if a single lane remains open to traffic moving in both directions or when dangerous activity limits the space on the roadway which can safely be occupied by motorists. Always be prepared to stop when approaching a work zone.

Some improvement and maintenance projects can be undertaken without closing any part of the roadway to traffic. Such tasks include road patching, road painting, debris removal, snow removal and utility work. In these instances, the work will usually be carried out by a slow-moving vehicle displaying flashing amber lights. Mobile work vehicles may also be equipped with warning signs or flashing directional arrows, instructing motorists to merge left or right.

Drivers must slow down considerably when approaching work vehicles, as they typically travel at speeds of around five mph. Begin to reduce your speed as soon as you spot a work vehicle in the roadway ahead, as you will close the distance quickly. Avoid sudden maneuvers and remember that mobile work vehicles always have the right-of-way.

Nearly all states have chosen to discourage dangerous driving around high-risk work zones by increasing or doubling the fines incurred by traffic violations. In some cases, the “double fine” rule applies to individual violations such as speeding, whereas in others, it refers to all moving traffic violations. Your state’s driver manual will include a break-down of work zone fines as they apply to your area – make sure you check out this information.

Understand that many high-risk work zones are under surveillance or will have an increased law-enforcement presence. With these extra measures taken to protect road users and construction workers, you are considerably more likely to be caught breaking the rules. 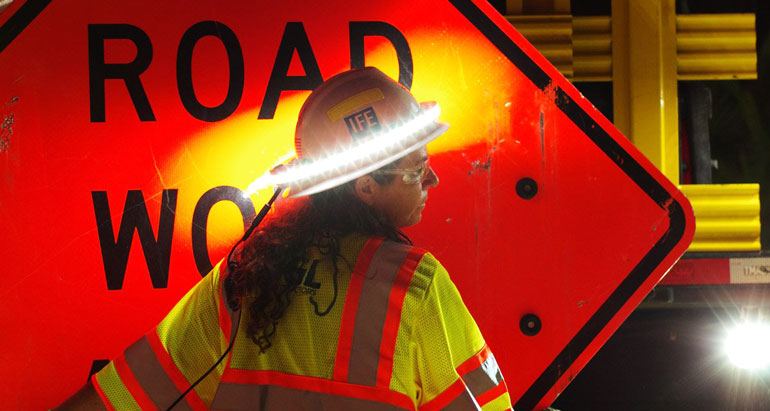 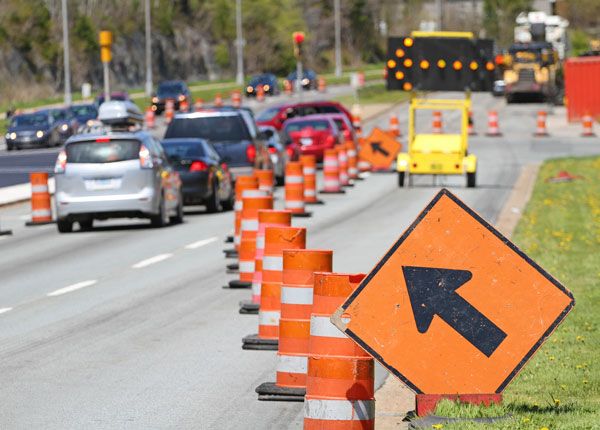 Driving in Work Zones 2 of 2 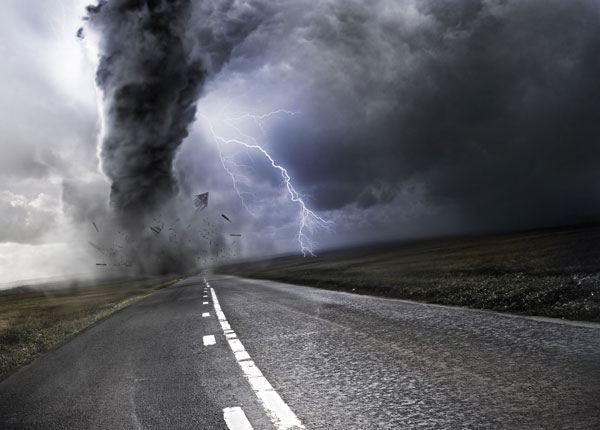 Driving in Bad Weather 1 of 11

Unfavorable weather and road conditions can create hazards that make driving difficult, and more dangerous. You must learn how to identify and compensate for these hazards, to protect yourself and other road users from harm. hoosing not to drive in rain, snow or fog, at night or during any other hazardous conditions is always the smartest decision. 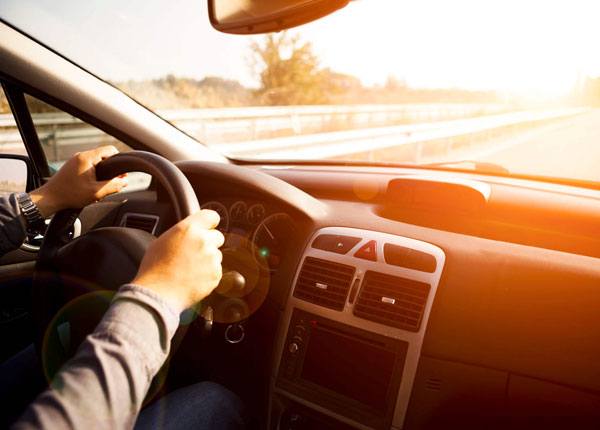 Driving in Bad Weather 2 of 11

Drivers are most susceptible to sun glare in mornings and late afternoons, when the sun is lowest in the sky. Sun glare is incredibly dangerous as it can impair vision and in extreme cases, cause momentary blindness. Less severe sun glare can distort road signs and traffic signals, leading drivers to make potentially devastating mistakes.

Driving on Highways 9 of 10

While exiting a highway is nowhere near as difficult or intimidating as entering one, there is still a lot that can go wrong. Learning how to exit a highway safely is a skill like any other you will learn in preparation for your driver’s exam. It will not require you to merge with traffic as you do when entering the highway, though it still deserves considerable attention.

Highway construction zones present additional risks to drivers and the construction workers themselves. You may encounter signs, signal devices, cones and traffic control personnel, all in place to warn motorists and guide them around the work zone safely. Slow down is the number one rule. Keep an eye out for speed limit signs and workers occupying the road.

There are additional rules, safety tips and considerations which all drivers must keep in mind when using limited access highways. A great deal can be done to minimize the risk of being involved in a highway accident – though we cannot eliminate that risk altogether. This vital conclusion to our highway driving section reiterates the safe highway driving practices you must adhere to, discusses the importance of planning for your trip and teaches you how to handle an emergency on the highway.

Preparing for The Trip

If your journey involves using unfamiliar limited access highways, planning your route ahead of time is essential. Mapping out your trip in advance will minimize stress and ensure you do not miss vital exits on the freeway.

This section summarizes those must-know highway driving techniques and safety practices. Organized into an easy-to-follow checklist, this information can be printed off and revisited as often as needed; you may wish to read through it again before taking your car onto a freeway.

Practicing defensive driving techniques can help you avoid accidents and emergencies on the highway. You may still encounter crashes irrespective of how careful you are, as you cannot rely on other drivers to make safe decisions all the time. The nature of expressway driving means that a single accident or collision can end up disrupting many different vehicles.